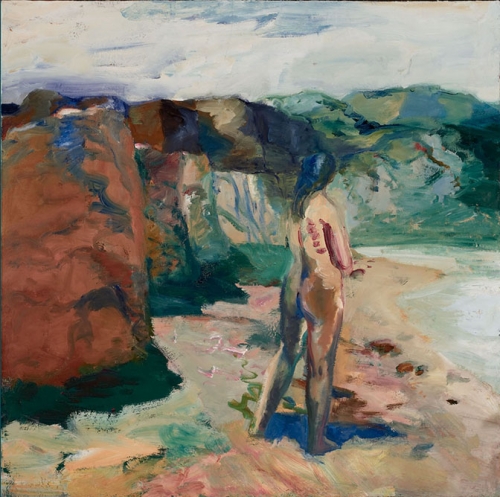 Bischoff, like Park and Diebenkorn, made artworks about daily life in Northern California. Using strong colors and assertive marks, he made dynamic street scenes and interiors portraying figures interacting.

George Adams Gallery, in Chelsea, is currently exhibiting 11 paintings spanning Bischoff’s career, works from 1954 to 1972. All but two of the canvases here depict female figures, sometimes posed by the shore, sometimes posed indoors.

In “Figure with White Lake,” 1964, a nude woman seen from behind stands on a beach. Water lapping against the sand is beautifully rendered, conveying depth, transparency and reflected light. Bischoff applies accurate color in large, vigorous strokes, calling attention to the materiality of the paint. The standing figure is also depicted with broad strokes, yet conveys a feeling of weight, form and light usually found in more highly detailed painting. Sky, clouds, rocks and foliage are convincingly evoked without distracting from the standing nude.

In “Figure at a Window with Boat,” 1964, a woman in the lower right corner of the composition has her back turned, leaning on a parapet looking out at a seascape. A sailboat in middle distance glows white, its reflection making a diagonal axis. Grey clouds congest the sky, separated by flashes of brilliant red paint. The dusky clouds have subtle adjustments of color, moving from orange-grey to violet-grey, creating an ominous light.

This absorbing show is the first gallery exhibit in 25 years to focus exclusively on Bischoff’s figurative works. On leaving the gallery, for a moment, the world is changed, its colors and shapes seen through Bischoff's eyes.