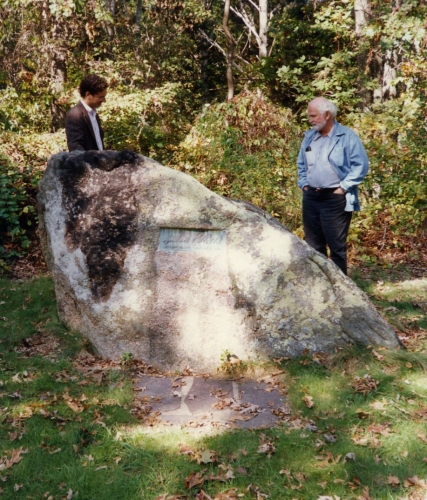 In 1991, George Adams accompanied Robert Arneson and his wife, Sandra Shannonhouse on a visit to the Pollock-Krasner House, former home and studio of painters Jackson Pollock and Lee Krasner. George recounts the experience and the complex relationship Arneson had with Pollock, both as a man and as an artist.

Between 1982 and his death in 1992, Bob Arneson made a series of over 50 works with Jackson Pollock as his subject. Besides Arneson's own self-portraits, other artists had frequently appeared in his work, as gestures of either admiration or friendship. While for the most part these case studies were characterizations in the same way Arneson approached himself as a subject, in Pollock he found an artist and human who could stand in as a symbol of the deeper questions and insecurities he faced in his life and career. I think it is fair to say that Arneson was taken with Pollock’s outsider-turned-insider career, an arc that was as fraught as it was tragic. As a man of the West himself, Arneson related to Pollock as someone who was gradually consumed by the insiders of the NY art world, a process in which "Pollock the man" was eventually destroyed by "Pollock the myth." Arneson, like many of his Northern-California peers, struggled with conflicting feelings of wanting to be recognized by the East Coast art world and yet not because it meant running the risk of giving up an independence and attitude they saw as uniquely West Coast and essential to their identity. In other words, selling out.

The fact is Arneson had been showing at the gallery in New York for many years; he had already had considerable success and his shows always did well both critically and financially, with works acquired by notable collectors and museums nationally and even internationally. As for the ‘Pollock’ series, by 1991 there had already been a number of exhibitions of on the East Coast, first at the gallery in New York in 1990 and then the following year a “Matrix” exhibition organized by Andrea Miller-Keller at the Wadsworth Atheneum in Hartford followed by a larger survey organized by Katy Kline at the List Center, MIT in Cambridge. Helen Harrison, then director of the Pollock-Krasner House in the Springs near East Hampton, saw the Pollock show at the gallery and wrote to Bob to propose an exhibition at the Pollock-Krasner House. The exhibition would include a lecture that Bob would deliver on Pollock during the run of the show, slated for August through October of 1992. High season in the Hamptons. Arneson was initially reluctant – to him this was foreign even hostile territory, an audience that was hardly expected to be receptive to his approach to Pollock with its mixture of light hearted humor and Jungian analysis.

In the end Arneson was persuaded, and so, in the fall of 1991, I met Bob and his wife Sandy Shannonhouse for the drive out to the Hamptons. In East Hampton we met Helen for lunch at Nick and Toni’s, a hang out for many of the local artists in the area, (John Chamberlain strolled in while we were there) and then Helen drove us along Pollock’s route from the train station to the site of the fatal car accident. From there we went to Green River Cemetery (Sandy asked Bob if he’d like to be buried there. “I’d be in good company,” he said, noting the graves of Stuart Davis, Frank O’Hara, Ad Reinhardt, Elaine De Kooning… and others, ”Maybe we should buy a plot.”)

We then drove to Springs and the house to visit Pollock’s (and later Krasner’s) studio, where we were allowed to walk in cloth covered shoes over the traces of so many of Pollock’s paintings. Sandy took photographs of the floor and of Pollock’s shoes which Bob later used as source material for works like the large-than-life portrait of Pollock, Myth of the Western Man (now in the collection of the Cleveland Museum of Art) and the drawing Boots of JP.

When we finally entered the house itself, Bob, steeped as he was in Pollock‘s life history was nonetheless surprised at the small-scale of the rooms and general lack of comfort. He was charmed when Helen opened the door to the cabinet that held the single speaker from the old music system, to show him the repurposed fragment of a presumably unfinished Pollock painting on the other side. When Helen led us up the narrow stairs to the second floor, however, I noticed a change in Bob’s behavior – he seemed suddenly more self-conscious as if intruding on someone’s privacy. The upstairs hall was narrow and we crowded into first one cramped and sparsely furnished bedroom and then another. In the last Helen remarked casually that it had been Pollock’s and half-joking (perhaps) suggested that Bob could stay there when he came to give his lecture.

I was standing in the hall just outside the door when Bob suddenly turned and pushed past me. “Oh no, no thanks. I don’t want run into Old Jackson’s ghost.” And with that he quick-stepped down the stairs looking very uncomfortable. It occurred to me at the time that he meant it and I swear he had turned pale.

Bob never did have a chance to reconsider Helen’s invitation to sleep in Pollock’s bed. By the following August he was too ill to travel from California and his friend and later biographer Jonathan Fineberg was asked to speak instead.

Bob died at his home in Benicia, where he was born and raised, surrounded by his family on November 2nd, 1992.

For more on Arneson's life and work, see here.