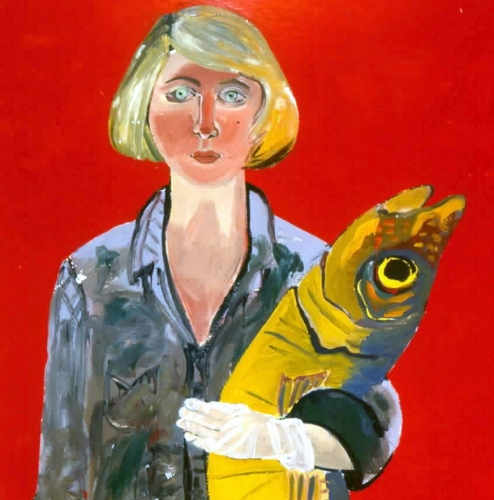 Joan Brown (1938-1990) was a prodigy in the “Bay Area Figurative style,” and “Portrait of a Chair” (1958), which serves as a kind of frontispiece to this exhibition, is a stunning example of someone mastering scale, composition, color and hell-for-leather brushwork at the tender age of 19. But Ms. Brown is best remembered for her semicartoonish but still seriously expressionist paintings made from the late 1960s until her death in a freak construction accident in India. (She had become a devotee of a certain spiritual teacher and was installing an obelisk in his ashram when it fell and killed her.)

Ms. Brown led a fast-track life early on, but settled down after her marriage (the third of four) to fellow artist Gordon Cook in 1967. “Joan, Gordon, and Rufus [their dog] in Front of the S.F. Opera House,” painted two years later and the largest work on view, is, in her mature style, another quite impressive painting—dignified yet intimate, simple yet subtle. In it and such works as a self-portrait with her son, “Christmas Time 1970 (Joan & Noel)” (1970), she essentially tones down and cheers up Max Beckmann’s brooding hyperbole.

Later, as presaged by “Woman Waiting in a Theatre Lobby” (1975), Ms. Brown would further simplify her human figures and backgrounds into semi-abstraction. While those paintings are certainly good, the ones in this show capture her high point.