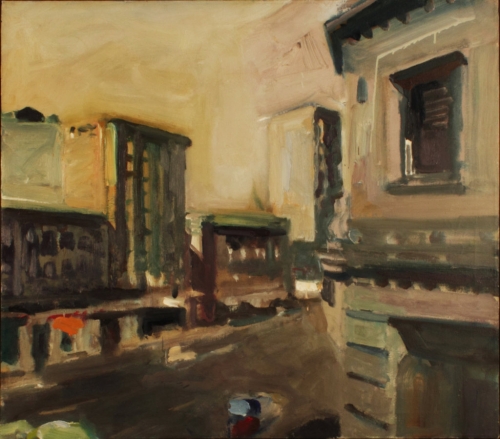 During Abstract Expressionism’s heyday in the 1950s, three artists in San Francisco turned away from abstraction and back to representational painting, founding a movement that came to be known as Bay Area Figuration. They were David Park, Richard Diebenkorn and the subject of this stirring exhibition at the George Adams Gallery, Elmer Bischoff (1916-1991).

The most unabashedly romantic of the three, Mr. Bischoff produced images of poetic nostalgia and spiritual yearning, grounded in richly sensuous paint. Edward Hopper was one inspiration. “Montgomery Block” (1956-59), the image of sunbaked low-rise buildings in San Francisco, looks as if it could have been painted by Hopper himself. Rendered with wide brushes in warm, muted colors, “Girl Getting a Haircut” (1962) presents a quiet scene in someone’s home that looks as if it were being viewed from outdoors by a lonesome voyeur.

The ghost of Albert Pinkham Ryder haunts several expansive canvases, including “Figure at Window With Boat” (1964), in which a woman gazes upon a still green sea where a small sailboat drifts near the horizon under a sky of tumbling clouds streaked by incandescent red. In the gorgeous “Bay” (1971), the small figure of a woman stands on a forested coast with her back turned, looking out to oceanic immensity under a partly cloudy sky.

While these landscapes may imply a retreat into archaic fantasy, in the context of the 1960s and early ’70s, they suggest something more urgent: a Whitmanesque search for the spirit of America.