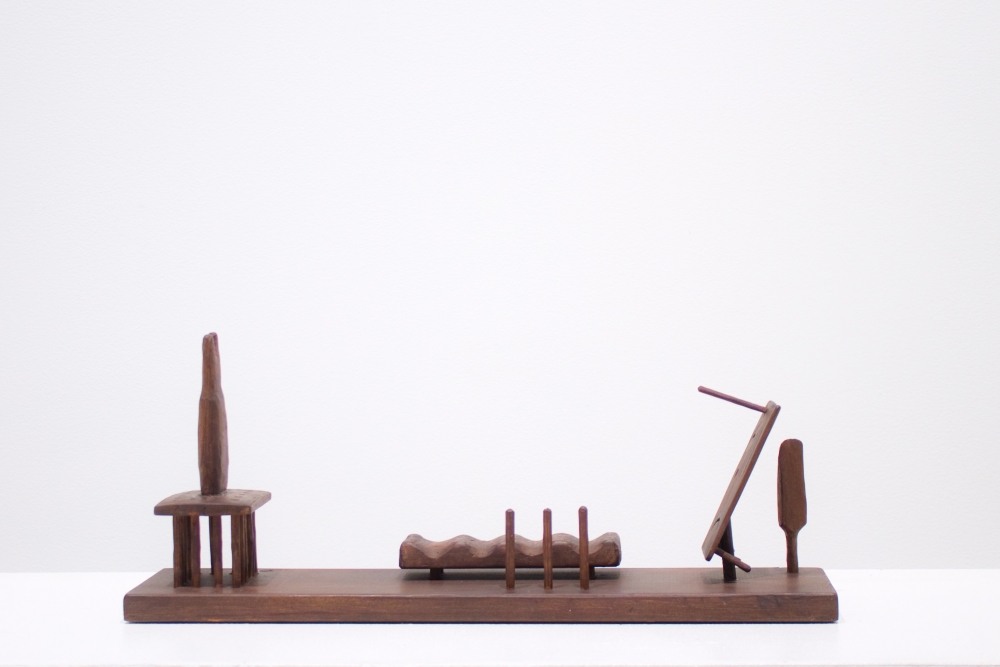 Though Jeremy Anderson is often placed in a lineage of avant-garde thought which can be traced back to the Cubism and Surrealism of a half-century prior, his own concept of sculpture as an art form went well beyond any physical limitations. Contrary to such formal modes, to him, the medium itself was besides the point; rather something more elusive shaped his work: a pursuit of truth.

By 1960, at which point Anderson’s preferred medium was wood (for its plentitude, ease of manipulating and comparative inexpensiveness), he had decided that “perhaps abstract art is more capable of dealing with abstract ideas than representational art… Truth in a tangible form is far from being absolute, but at least you can put your hands on it,” a succinct example of the contractions so apparent in his sculptures of the time. In one sense he was a prolific artist with his uniquely bizarre compositions of spikes, blobs and slabs which resonate with the most fundamental ideas of image-making. Early on his influences were neolithic and archaic forms, ancient civilizations and their monuments and remains, reconfigured and re-imagined as art-objects, devoid of purpose yet imbued with a singularly utilitarian ethos. When writing about Anderson’s sculpture for the 1975 retrospective of his work, Dennis Adrian drew a clear line with the fundamentals of Surrealist sculpture and “its propensity toward organic abstract form, that is forms which, while not specifically representing a natural object, may be seen as likely to have occurred as the result of nature… [and] has the power to express and reveal a powerful mythic content in the creative imagination.” Yet despite the admittedly “organic abstract forms” which constitute many of Anderson’s sculptures, their basic structures clearly allude to the same structures which surround us in our daily lives, such as tables and chairs, vessels and totems, plazas and towers. By contrasting these two elements - the natural and man-made - in his work, he synthesized a form of abstraction which was equally opaque and obvious in its meaning and intention.

When confronted with Anderson’s sculpture, there is an elusive sense of familiarity. The human impulse to recognize and interpret plays an outsized role in our understanding of his tableaux, an attempt to ascribe meaning or function, particularly in the absence of titles. Indeed, most of Anderson's work up to the mid-60s remained untitled, at odds with the generous and inventive use of language he employed in many of his later drawings and sculptures. Yet fundamentally, at least during the first half of his career, his focus was on the metaphysical attributes of the physical form. His conviction that "the importance of sculpture lies in its ability to place emotions, things, ideas and vague unformed convictions together in one complete integral form" hints at the mindset behind his process. Rather than the emotional and impulsive techniques that defined abstraction at the time, Anderson had a studied approach particularly when working in wood: "You have to start with fairly definite ideas because not much happens when you're working on it." Drawing was his starting place, where he allowed "controlled accidents" to inform his process, frequently translating from an expansive collection of sketches when making his sculptural work. Despite the immutable properties of wood, Anderson was not above making additions and revisions to his sculptures, editing and adding or removing parts over time. Interestingly, the composed nature of many of these works brings to mind language, and where a specific grammar emerges, suggests a sort of cipher to be decrypted. Whether or not this was how Anderson viewed his work himself, is hard to say; in considering the value of illusion in art, he determined “non-objective sculpture” to be “one thing that is just itself, period.”