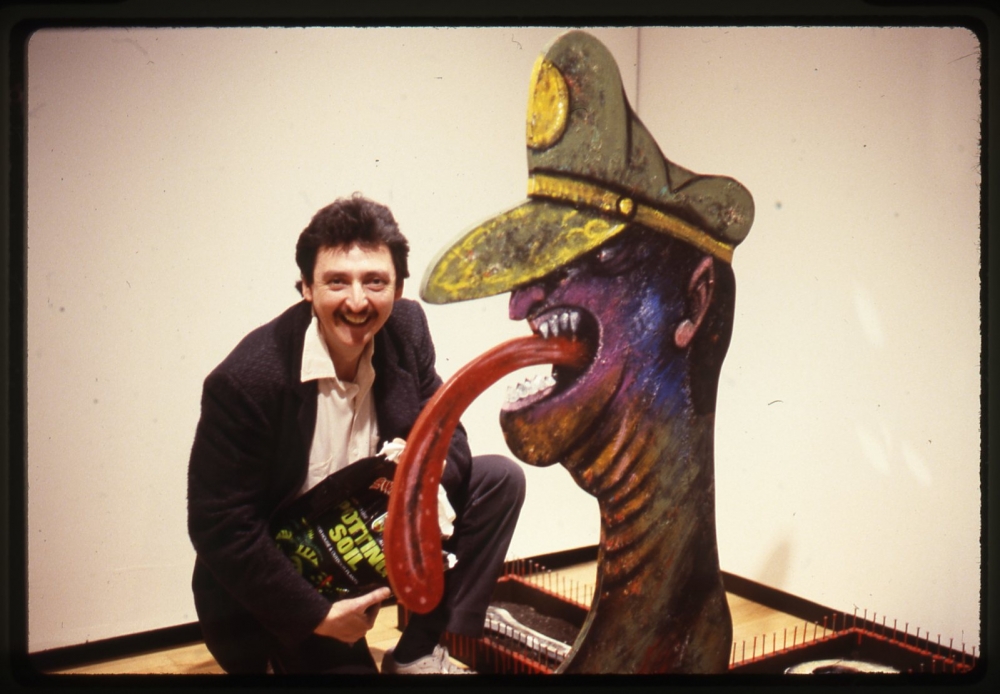 In 1985, Azaceta received a grant from the National Endowment of the Arts, which in part provided him with a large studio in SoHo, sponsored by the non-profit Cayman Gallery. This sudden and significant increase in studio space meant that Azaceta was not only able to paint on a much larger scale than before, but also allowed him to explore the themes of his paintings and drawings in three dimensions. Though he had experimented with sculpture in the past, an invitation in 1985 by Creative Time to participate in their Art in the Anchorage exhibition under the Brooklyn Bridge that summer resulted in a major installation of his three-dimensional work titled Urban Inferno. This was his first exhibition comprising almost entirely of sculpture, mainly painted plywood cut-outs of figures and objects derived from his paintings, including a platoon of grinning, cartoon cockroaches. Critic Karin Lipson described the result in New York Newsday as “a vision of hell, but [one] created with charm and good humor.” The following year, several of Azaceta's wooden roaches made their way into his first retrospective at the Museum of Contemporary Hispanic Art, Tough Ride Around the City.

As the decade advanced, Azaceta continued to experiment with sculpture, moving between two and three dimensions while continuing to engage with themes of oppression, violence and exile as they related to his personal experiences. For the 1988 Frumkin/Adams Gallery exhibition Spectrum: New Developments in Three Dimensions, he was included with the work El Dictador. Featuring a luridly painted cut-out head of a general with a blood-soaked boot for a body, the base of the sculpture mimics a cross-shaped grave complete with skeleton, outlined by bloody nails and filled with dirt. To Azaceta, the dictator in the work is no particular person, only a symbol of oppression and the sculpture draws on imagery he was exploring in his paintings at the time. Despite the gory reality the work implies, for Azaceta it speaks to a broader inhumanity that must be corrected, a universal theme which he has fervently explored throughout his career.