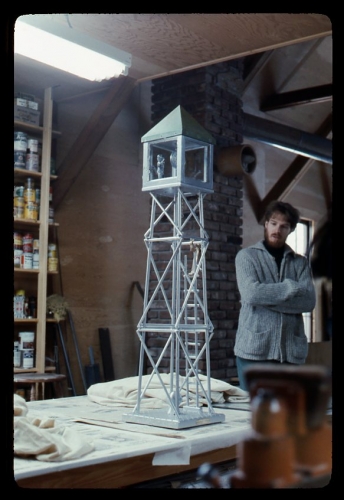 Sims, the recently appointed curator of the collection at the Whitney Museum of American Art paid a visit to Westermann’s Connecticut studio in December of 1976 to look at new work. Sims was a co-curator for the Whitney’s upcoming Biennial, which opened in February, 1977 and Fools Gold was ultimately one of three pieces chosen for the exhibition. It was not the first time for Westermann to be included in the Whitney’s regular exhibition - he was first included in the Annuals of 1964, 1968 and 1970, and in the Biennial of 1973.

For the introduction to the 1977 catalogue, the curators (Barbara Haskell, Marcia Tucker and Sims) write: “The narrative structure adapted recently to photography has also been of interest to artists who incorporate a broad selection of objects and materials in their work… Among the artists whose work has resolved around narrative allusion for some years, two of the most influential have been H. C. Westermann and Jim Nutt. Nutt’s recent stage-like tableaux with their diminutive figures seem to present a moment of surreal drama. Westermann’s sculpture functions as composite vignettes in the imagination although, more than Nutt, he shows an affinity for the Dadaist predilection for verbal-visual puns. Both artists use miniature scale to free objects of their ordinary associations and more closely align them in the imagination."

True to this characterization, Fools Gold pulls references from various lines of popular culture including a Chicago amusement park ride Westermann often visited; the film “The Treasure of the Sierra Madre,” starring Humphrey Bogart as a greed-driven prospector; and the actor Chester Morris, known for his portrayals of the “sensitive and principled tough guy.”