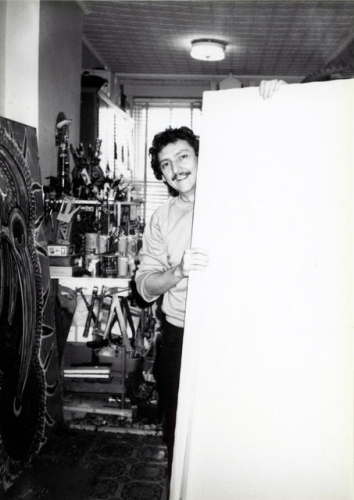 Luis Cruz Azaceta in his Queens studio circa the early 1980s.

In the early 1980s, Luis Cruz Azaceta was living and working out of a small studio in Ridgewood, Queens. George Adams recalls his first time visiting Luis’ studio and the impression he made:

"In 1981, in preparation for his upcoming show at the gallery, Luis invited me to visit his studio. At that time for me, making studio visits to gallery artists usually entailed little more than walking around the corner in SoHo. Luis lived in Queens - in Ridgewood - which, for someone having grown up in "The City," felt like the suburbs. In those days SoHo, the East Village and other nether parts of Manhattan could be challenging in terms of heat and hot water and other facilities, but at least you had the comfort of fellow suffering artists. In Ridgewood, Queens there was only Luis.

In any event, I went and it was unlike any studio visit I had ever made. Luis was living in a railroad flat in a fourth floor walk up that he shared with his young son. His studio: the kitchen. Yet Luis painted on canvases that were 5,6, even 10 feet – diptychs as otherwise once completed, they would not get out his door. This visit Luis pulled canvas after canvas into the kitchen. As I recall, he leaned them against the sink with a window providing light. We had to step out into the hallway, balancing against the stair railing to be able to see the largest ones. What struck me was an artist who would make art anywhere because he had to. I think for the first time I recognized that a real artist wouldn't let limitations get in the way, they simply HAD to make art under any circumstances.

Later in the 80s, Luis was asked to do studio crits at RISD and, because I had relationships with the Museum there, he asked me to come along. Instead of taking the train I offered to drive him which, as it turned out, was a mistake as neither of us had any sense of direction. Somehow we arrived in Providence.

As late as we were, all was forgiven and Luis and I were taken to the student studios. We began our tour and Luis worked his way calmly through several. I, already chastened by my failure at delivering the goods, remained silent. I began to notice, however, that Luis’s questions began to get sharper and his face to change color. This was alarming. On the other hand, he had reason: the students were, to be blunt, not terribly impressive. Their work was haphazard and lazy to our eyes. Luis looked at me and asked me why I wasn’t saying anything. "It’s your crit," I responded. "Jump in, George," Luis replied. So I did.

At the end of the day Luis was scheduled to give a talk. It was one of the most inspiring artist talks I have every heard – perhaps the most. Luis was passionate and pissed. “It is a privilege to be able to go to your studio each day. A privilege. Not a right, a privilege.” His message was that being an artist is not just showing up, that it is a responsibility, a duty to engage. He spoke for about forty minutes and I don’t think there was anyone in the auditorium who did not hear his message: being an artist was a very serious undertaking with moral and ethical implications. And don’t aspire to become one if you are not willing to accept those terms.”

You can watch a full tour of Azaceta's current studio in New Orleans here.