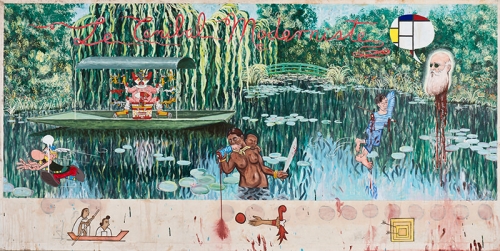 Enrique Chagoya is included in a group exhibition at the Sheldon Museum of Art, University of Nebraska, Lincoln, which gathers a range of works investigating the genre of portraiture in contemporary art.

Chagoya is represented by his 1999 painting Le Cannibale Moderniste. The artist considers cultural appropriation to be a form of cannibalism, and in this particular painting, he takes that idea at face value; his depictions of modern masters such as Pablo Picasso and Claude Monet as the victims of a violent, cannibalistic attack address the real-life consequences of Western colonization experienced by those who have been placed in the margins.

The exhibition is on view through July 3, 2021. Find more information here.

Watch a lecture on Chagoya's painting by Professor Courtney Hillebrecht of the University of Nebraska, organized on the occasion of Human Rights Day.