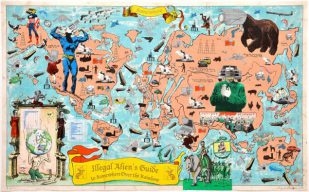 Enrique Chagoya currently has a solo exhibition Reimaging the New World of his prints and codices at the Nevada Museum of Art in Reno, NV. Chagoya often appropriates the visual tropes of Western modernism in his works, just as the masters of Modern art cannibalized so-called primitive forms without properly contextualizing them. His codices, based on the pre-Columbian format, illustrate an imagined world in which the European conquest of the New World failed and the normative culture of the Americas is based in indigenous ideology.

In conjunction with the exhibition, an artist's talk is scheduled for Thursday, April 12 where Chagoya will discuss the exhibition.