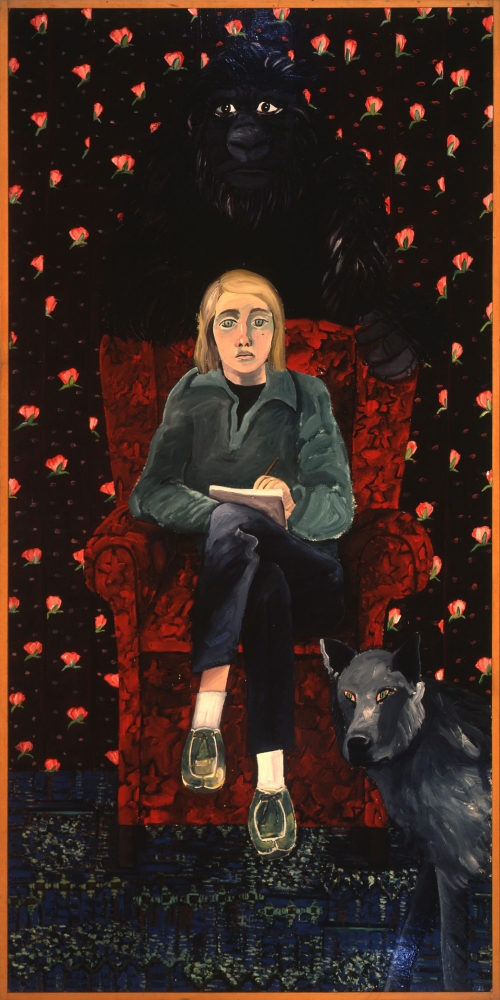 Collection of the Norton Museum of Art.

In April of 1991 I was at a San Francisco warehouse with Mike Hebel and Noel Neri to select paintings for Joan Brown’s memorial exhibition at the gallery, following her tragic death the previous fall, at age 52. The warehouse was arranged in long racks containing works from all periods of Joan’s career, so it was no surprise that I would come across a group of paintings that I had not seen before. These were all enamels on 8x4-foot masonite panels from 1970-1971, predating Joan’s representation by the gallery. Presumably I had never seen them because Joan never thought to revisit them - she was an artist entirely focused on her current body of work and had little interest in showing older work. I should admit that this included her drawings from the early 70s, which were the subject of her previous show at the gallery. When that show was proposed Joan was initially skeptical; Allan and I felt the drawings deserved of attention and in the end she was persuaded.

But now, with the general idea of a self-portrait survey to commemorate her career, I was free to select work from all periods, and this body of work quickly became my focus. Among the paintings included in the exhibition were three paintings now considered to be classics: Self-portrait with Fish (1970), and Self-portrait with Gorilla and Wolf (1971), and Self-Portrait with Noel, Christmas, 1970 (1971). These paintings, all in her preferred Sherwin-Williams oil enamel paint on masonite, were made when she lived in the Sacramento Delta (1969-1971) where she moved after marrying artist Gordon Cook. Their biographical and psychologically compelling imagery and their large-scale mark them as the beginning of what would be the central theme in Joan’s work. These paintings also show her close study of other artists’ work (Frida Kahlo in the case of Gorilla and Wolf and Henri Rousseau in the case of Christmas, 1970) and her increasing use of symbolism (i.e. the gorilla, wolf, fish and cats in these paintings) to indicate a more complex and nuanced purpose than simply self-representation.

Taken together, the exhibition traced Joan’s process of self-discovery with an emphasis on her spiritual awakening culminating in Homage to Akhenaton (1983) while also reflecting Joan’s humanity. Details of Joan’s daily life emerge in such paintings as Self-portrait with Swimming Coach Charlie Sava (1974), After the Alcatraz Swim #3 (1975), Bicentennial Champion (1976), and Self-portrait with Donald (1983). This duality remained at the heart of Joan Brown’s work for the remainder of her career and her art reflected her appreciation for both the universal and the more mundane aspects of human existence.