Mixed media and collage on paper

To open the fall season, the George Adams Gallery is pleased to announce an exhibition of drawings by Robert Arneson on the theme of nuclear war. Part of a broader series of anti-war works dating from 1982 to 1986, these drawings provide an overview of an important body of work which comprises some nine dozen pieces in a range of mediums. A full-color catalog including essays by historian Kathryn Olmsted and curator David Kiehl, with an introduction by Sandra Shannonhouse, will accompany the exhibition.

For many years, Arneson kept his political and social engagement to his private life, though a few iconic works (such as Toaster from 1965) crossed the divide. The year 1982, however, marked an abrupt shift in his work as he began to focus on the pressing concern of nuclear proliferation. Motivated in part by the increasingly hawkish rhetoric of President Reagan and faced with an unexpected and public controversy surrounding a recent commission, Arneson chose to engage fully with politics, “to bring the nuclear war issue into the gallery, into the museum where it hasn’t existed before.” Over the next five years, this subject predominated, quickly expanding to touch on not only the huge potential for destruction contained in modern arsenals, but the senselessness of war and its very real human toll. Around this same time, drawing was becoming an increasingly visible part of Arneson’s practice and the works on paper from this series are some of his largest and most complex. Ranging from journalistic to outright satirization, the drawings on view present his opinions of the events and politics of the day in the most immediate, raw and even personal terms. Drawings such as Nuclear Weapons Effects bluntly state through text and images the destruction caused by a nuclear blast, while the monumental Joint re-imagines the leaders of the US armed forces presiding in a ghastly tribunal.

Arneson later noted, “in drawing, one can search out the image more,” a sentiment fully on view in these works. Writing, marks, collaged photos and stenciled motifs are all overlaid with a complexity and physicality borrowed from his sculptural practice. Grim subjects – nuclear winter, mass graves, unimaginable destruction – are treated with a typically acerbic sense of humor, which succeeds in amplifying the impact of each image. Heads in particular are a theme: either disembodied and mutilated or concealed behind semi-human masks. In essence, Arneson distills the underlying conflict down to two archetypes - the victims, horribly disfigured, and the perpetrators, equally de-humanized. For drawings like Nuclear War Head #1, which reads as an unsettling pun on both the weapon and its inevitable result, the ‘head’ is memorably captured as little more than a skull, vacant eye sockets and flesh dissolving into a riot of marks. Arneson’s invented characters, such as Colonel Nuke, are weapons personified, mouths gapping with jagged teeth and lolling tongues, lifeless eyes and the veneer of officially sanctioned action by way of rank and a military cap. Further reinforcing Arneson’s opinion of these decision-makers in nearly every instance insignias are replaced with skulls. 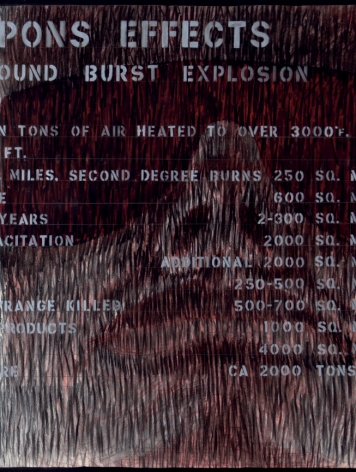 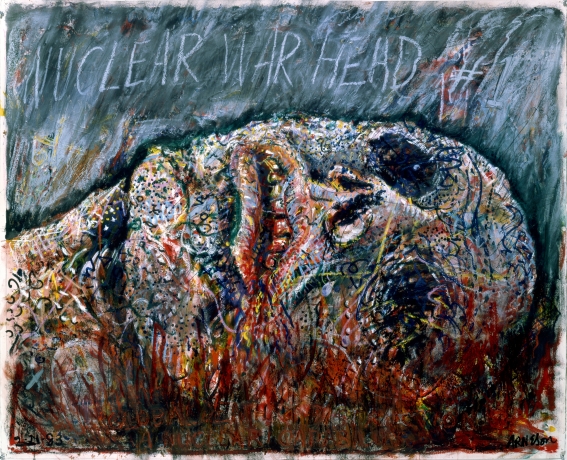 Karen Nikos-Rose has recently posted a story to the UC Davis Arts Blog on Robert Arneson's Anti-War works, as well as Kathryn Olmsted's contribution to the catalog on the series. The post provides an overview of Olmsted's essay for the catalog and her previous work, as well as details on Arneson's career in context to Bay Area politics and his thirty-year tenure as professor at UC Davis. Nikos-Rose writes "Arneson, true to form, took his political feelings and activism to his clay, paint and paper, creating what is often painful, crushing commentary on the 1980s arms race."