Portrait of a Chair

Portrait of a Girl

Self-Portrait with Fish and Cat

Acrylic, pencil and crayon on paper

Gordon, Joan and Ruffus in Front of S.F. Opera House

Acrylic and ink on paper

Acrylic and pencil on paper

Woman Wiating in a Theatre Lobby

This show is dedicated to the memory of our dear friend and colleague Paule Anglim.

During the month of April the George Adams Gallery will mount an exhibition of paintings by Joan Brown (1938-1990). There will be nine paintings on view and will include examples of some of her best-known images from the 1950s, 60s and 70s.

After a roughly five-year hiatus, Joan Brown exhibited a series of large-scale, autobiographical paintings shown at the Hansen Fuller Gallery, San Francisco in 1971. Having remarried (to the artist Gordon Cook) in 1967, Brown left her native San Francisco for the Sacramento River’s Delta area where she made the 8 foot tall, enamel on masonite paintings that form the core of the current exhibition. No longer working in the virtuosic Bay Area Figurative style typified by David Park and her mentor Elmer Bischoff, these paintings are broadly rendered yet closely scrutinized self-portraits as a young girl, a young mother, as a woman, and as a newly wed. These paintings, rarely seen or exhibited as a group, mark Joan Brown’s re-emergence as a lively artistic force in the California Bay Area, a role she would maintain until her untimely death at age 52.

Included in the exhibition are her iconic Self-portrait with Fish, 1971; Christmas Time (Noel and Joan), 1971; and Portrait of a Girl, 1971. In addition the exhibition will feature: an important early canvas Portrait of a Chair, painted in 1958 when Brown was just 19 years old; Joan, Gordon, and Rufus in Front of the S.F. Opera House, a triple portrait of the artist with her new husband Gordon Cook and their dog Rufus, from 1969; and the quintessential mid-70s self-portrait, Woman Waiting in a Theater Lobby from 1975.

The exhibition, an expansion on the gallery’s booth at the recent Art Dealers Association Art Show, will run from April 1 through May 2. 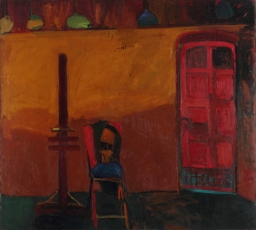 Two seminal Figurative Expressionists have concurrent exhibitions in two continents. An exhibition of many seminal large canvases by Leon Golub entitled Bite Your Tongue is currently at Serpentine Galleries in London, and Joan Brown’s Selected Major Paintings and Sculptures 1957-1975 is up at George Adams Gallery in New York City. 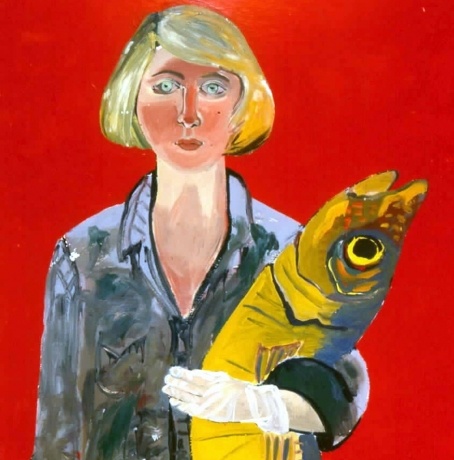 Joan Brown (1938-1990) was a prodigy in the “Bay Area Figurative style,” and “Portrait of a Chair” (1958), which serves as a kind of frontispiece to this exhibition, is a stunning example of someone mastering scale, composition, color and hell-for-leather brushwork at the tender age of 19.