During February and March the George Adams Gallery will present a new series of paintings by Amer Kobaslija. The series, titled “The Road to Rossinière” consists of small, medium and large-scale landscapes and studio interiors that detail the artist’s experience of Rossinière, Switzerland, a small Alpine village in the canton of Vaud where the famously reclusive Balthus (1908 - 2001) settled toward the end of his life.

Kobaslija, who is best known for his depictions of his own studios from unexpected, vertiginous angles, began the series in 2008 as wide-angle format landscapes of Rossinière after an impulsive visit to Balthus’ home.  Subsequently returning to Switzerland and eventually befriending Balthus’ widow Setsuko and daughter Harumi, Kobaslija was able to paint the views from the family’s chalet as well as the chalet itself, a massive wooden structure built in 1756.  However, it was not until the summer of 2010, after three years of repeated visits, that Kobaslija was given permission from the Balthus Foundation to enter Balthus’ studio; an honor never before bestowed.  Untouched since Bathus’ death in 2001, the studio still contains unfinished paintings, the artist’s palette, chair, and even the 92-year-old painter’s shawl.

The paintings included in the exhibition range from twelve by fifteen-inch studies to six by eight-foot tall paintings on wood panels.  Many depict Kobaslija’a impressions of the preserved studio.  In Post Mortem, for example, the room is viewed as if from above the windows opposite the studio’s entrance.  The wood-paneled walls seem to flex as the viewpoint shifts from directly above the studio – with a bird’s-eye view of Balthus’ quilt-covered chaise longue – to facing the far wall, where empty, stretched canvases lean.  A similar technique is employed in the landscapes, such as Coming of Winter. Here, the effect is less that of a vortex than of simultaneity that skews scale; taking in the yard, variously populated by sheep, a barn cat, and late-autumn plants, the garden house, Le Grand Chalet, and the rolling mountain landscape in one sweep, the painting gives each moment equal weight, effectively diminishing the five-story, 113-window chalet in scale while maintaining its formidable presence.

“The Road to Rossinière,” is Kobaslija’s fourth exhibition at the gallery since his debut in 2006. He was recently included in “Narcissus in the Studio: Artist Portraits and Self-portraits” organized by the Pennsylvania Academy of the Fine Arts, Philadelphia, and “Real(ists) at the Selby Gallery, Ringling School of Art, Sarasota, Florida.  Since 2005 he has had solo exhibitions with Galerie RX, Paris, Rena Bransten, San Francisco, and was the recipient of grants from Joan Mitchell Foundation and Pollock-Krasner Foundation. He has been Visiting Assistant Professor of Visual Art at Bowdoin College since 2008.

“The Road to Rossinière” will be on view from February 11th through March 26th, with a reception for the artist on February 11th, 6pm-8pm. 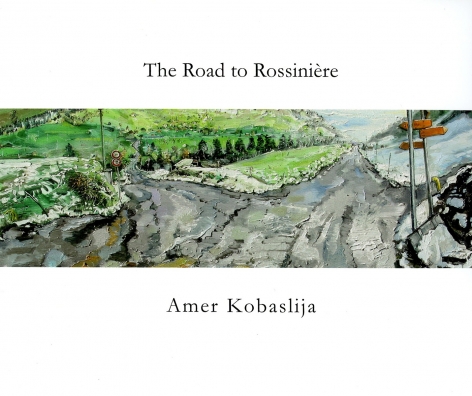