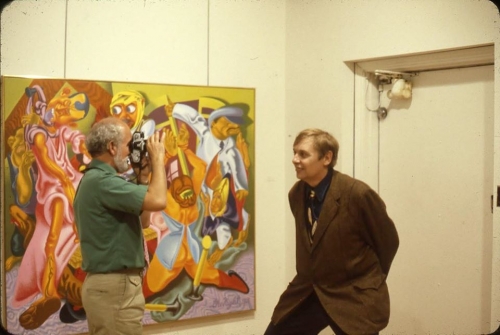 Taken in 1979, it captures Robert Arneson photographing Jack Beal in the back room of the gallery’s old space on 57th St. On the wall behind them is a new painting by Peter Saul. Bob was in New York for the opening of his exhibition “Heroes and Clowns,” the first major showing of his portrait busts, many of which were of fellow artists. The photo Arneson is taking was to be a source for a ceramic portrait of Beal, though Jack here is without his signature cap. Ironically, Beal, who was several inches taller than Arneson, is slouched down so Bob could get the shot straight on.

Though there was a great deal of mutual respect between the two artists, the finished portrait was apparently a source of tension. In a letter to Allan Frumkin several years later, Arneson observes, “I made it rather too amusing - right?”